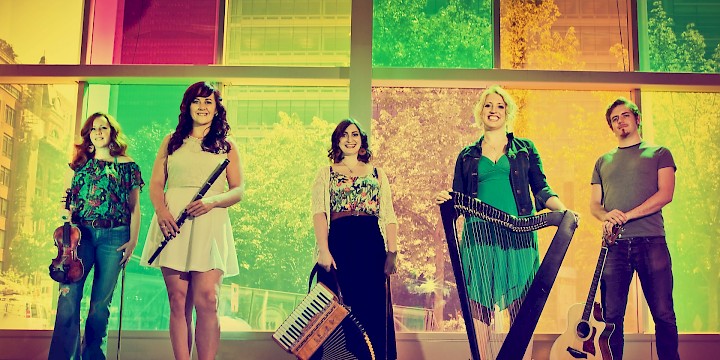 Andreas Tophøj and Rune Barslund are two of the leading Danish folk musicians of their generation, performing with violin, accordion, viola and piano. Their sound is closely linked to the Danish folk tradition, but the two young musicians also offer a new interpretation of Danish folk influenced by music from various countries and traditions. They draw on a wide range of inspiration gained from residing in Ireland and the US and from encounters with Celtic and Nordic musicians and musical cultures. Accordingly, the repertoire of the duo is based on a compelling musical melting pot and mainly features original compositions.

A stunning synthesis of virtuosity and energy, The Outside Track's marriage of Canadian, Scottish and Irish music and song has been rapturously received around the world. Hailing from Scotland, Ireland, Cape Breton and Vancouver, its five members are united by a love of traditional music and a commitment to creating new music on its foundation. Using fiddle, accordion, harp, guitar, flute, step-dance and vocals these five virtuosos blend boundless energy with unmistakable joie de vivre. Each player within The Outside Track is a master of their chosen instrument with the band stacking up an impressive amount of international awards.