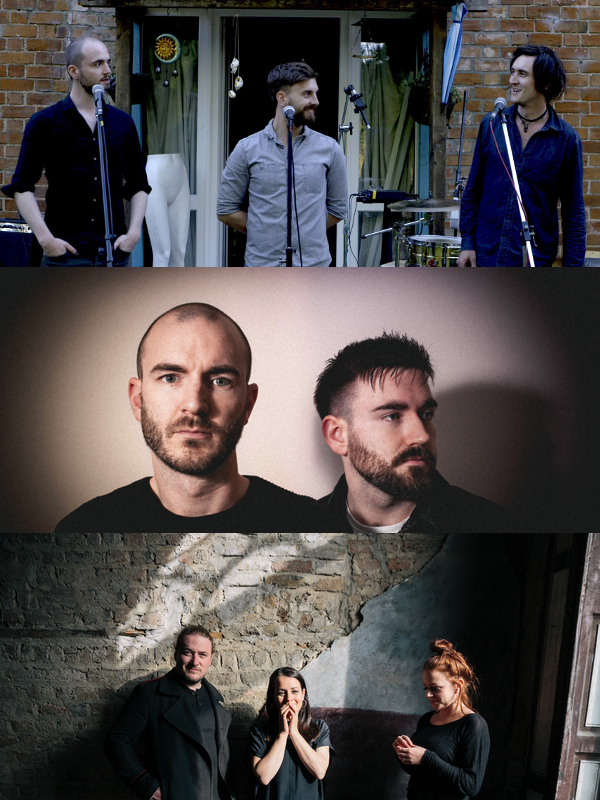 TRÚ is a trio from Northern Ireland with an eclectic musical heritage. They explore songs from folk traditions in Scotland, England, the Appalachians & Ireland, with a particular passion for traditional songs from their native Ulster. TRÚ is Michael Mormecha, Zach Trouton and Dónal Kearney. Emerging from the worlds of alt-rock, math-rock and choral music, their unique approach to folksong is both reverent and contemporary. Collectively, TRÚ’s sound is sensitive, soulful and timeless.

Over the past year, the group has amassed a loyal following at intimate gigs in Ireland, Scotland, England and France. TRÚ's fresh take on the old songs has been noticed by the BBC, Celtic Connections and continues to turn heads in the Irish folk scene. Their début single was produced by critically-acclaimed jazz producer David Lyttle (Lyte Records), and an album is set for release in 2019.

Dublin brothers Richie and Jamie Martin formed Cry Monster Cry in 2010. Both singer-guitarists, they write honest, lyrically rich songs with tight fraternal harmonies and evocative melodies, taking listeners on an intimate journey. The brothers’ early interest in music came out of being exposed to the eclectic tastes of their parents. Those nostalgically youthful years carry sonic memories of Dylan, The Everly Brothers, Van Morrison, Ray Charles and Simon and Garfunkel—a lyrical salad of great singers and writers. And summer holidays with long car journeys through the Irish wilds of their mother’s Donegal were always accompanied by mixed tapes of classics sixties/seventies songs. Richie began with the violin before progressing to the guitar in his teenage years. Studying music in college, he experimented with different sounds. Jamie began with the piano before becoming obsessed with almost any instrument he could get his hands on. His obsession for the written word led him to study English in college. Releasing their debut EP in 2012, the band has toured extensively, playing sell-outs across Europe and performing on television shows--such as Other Voices and The Imelda May Show--to millions of viewers. Their debut album Rhythm of Dawn (2015) was RTE Radio 1 Album of the Week, its catalyst effect seeing the brothers push their songwriting up another level.

The Whileaways represent three powerful forces in Irish roots music in their own right— being individualistic singers who have fronted their own projects and have six albums to their collective credit. While touring separately, Noelie McDonnell, Noriana Kennedy and Nicola Joyce came to know each other’s singing on home ground while playing sessions in that folk melting-pot of Galway city. Experimenting with vocal styles as a trio, they gelled and were hailed as ‘a knockout of the festival’ at the legendary Port Fairy Folk Festival, Australia in 2012. The Whileaways have continued to make waves in the folk music scene both abroad and at home. Their critically acclaimed 2016 album Saltwater Kisses received a four-star review in the Irish Times and was the RTE Radio 1 Album of the week on its release. This commercial attention also brought them to perform on The RTE Late Late Show and The Nathan Carter Show. 2017 was a year of exploring new territories for them as a trio of songwriters. Their outstanding Galway International Arts Festival performance showcased an exciting new project, enhanced by their Saltwater Ensemble, an eight-piece brass and string group specially commissioned for the occasion. This unique combination of songwriters, singers and voices creates enthralling live performances and has established them as a true storm of talent in Irish roots music. They began touring their album From What We’re Made in December 2018--a song from which garnered huge praise at the inaugural RTÉ Radio 1 Folk Awards in November at Vicar Street.