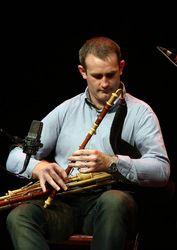 Pádraig McGovern hails from Ballymagovern, a townland in the Cavan-Leitrim border area. He was taught by Belturbet piper P.J. Flood and heavily influenced by accordionist Vincent Tighe and the renowned researcher Fr. John Quinn. He has recorded with numerous artists over the past decade, including a duet album with Peter Carberry entitled ‘Forgotten Gems’ and more recently with the highly acclaimed band on their self-titled album ‘Garadice’. He has worked as a researcher/performer on many projects including ‘The Leitrim Equation 4’ project and the ‘The Pipes, The Pipes’, a show devised by Dónal Dineen and produced by Siobhán O’ Malley. He has also performed with many bands including Lúnasa, Dervish, Téada and Gatehouse.